Your adventures in the Wilderness start here

Register Log in
You are using an out of date browser. It may not display this or other websites correctly.
You should upgrade or use an alternative browser.

Hey everyone! We are happy to officially announce the next Deadman Mode Tournament will be starting at 2:00pm EST / 7:00pm GMT on Saturday the 14th of November.

This tournament will last for 1 week, with the final hour Permadeath stage commencing at 2:00pm EST / 7:00pm GMT on Saturday the 21st of November
(subject to change)


Overview of the changes below:

Don't forget to scroll down to see changes to the events!​

LegacyPK’s DMM functions in the same way as you’d expect. On killing other players, you will recieve a bank key, which can be used on the deadman chests located in most banks around the world. Each key will produce the 10 most valuable stacks of items of the killed player’s bank, and the killed player will also lose some experience points in their unprotected skills if skulled.

On LegacyPK's DMMT, ALL drop rates are increased by 50%, and all Combat XP is 65X (Skilling XP is 25x OSRS base), without restrictions or caps. XP is reduced by 50% when in a safezone.

Skulls, Deaths, Safezones, Bank Keys, XP Acceleration for lost XP on death and the Safe Deposit Box all function the same way as OSRS. For further information, talk to the NPC Nigel in Lumbridge Courtyard.

LegacyPK has a few unique features within it’s Deadman world, so be sure to read through everything below to familariaze yourself with the tournament.​

In DMM, you can get around the world quickly by using the Teleport Wizard npc, which economy players will be familiar with. The Teleport Wizard can be found in most cities, and will charge you a few runes for the service. Make good use of this to be able to get to areas such as dungeons and far away cities easily, and skip the walk!

The teleporter consists of categories, and in this next Deadman Mode Season there has been a change to the teleporter.

The teleporter unlocks now work as follows (based on Total Level): 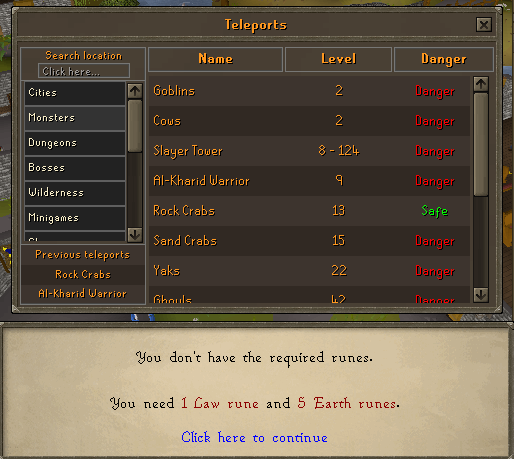 NOTE: Teleport wizard now works slightly differently, the total level requirements are still there but he also now has a cool down which starts at 6 minutes, this is further reduced depending on your donator rank going down to a minimum of 3 minutes for $100+) Note: these cooldowns dont apply to monsters or cities teleport
​

On LegacyPK, you can protect your stats by using the “Item’s kept on death” interface, and this can be done by simply clicking on the stat that you wish to protect. You can protect up to 2 combat stats, and 3 skilling stats. Your hitpoints level can also be protected via the quest tab.

Over the course of the week, certain parts of content will be unlocked. The details for this shown below. . Please note that Lava Dragons have been now unlocked from the start of the tournament. You can check the current Day in the Server info tab, on the left of the logout tab.

Players can switch to Ancient Magicks at the altar inside the Jaldraocht Pyramid.

Ferox enclave is the homebase for LegacyPK’s DMM. All players will spawn here with the default starter set, which includes some teleportation tablets, some coins and a starter pack. This starter pack contains starter weapons and some low level food. These weapons cannot be used in Player V Player combat, and will degrade after a set amount of usage.

Within Ferox enclave, you will find a variety of NPCs for your convenience.

​
The NPCs are as follows:

Blood money can be obtained by killing other players, or killing NPCs in the Wilderness to get Emblems, which can then be traded in to the Blood Money vendors. The prices for the items can be seen via the quantity.

At LegacyPK, we have seperated the blood money store into three locations. The locations and the contents are listed below: 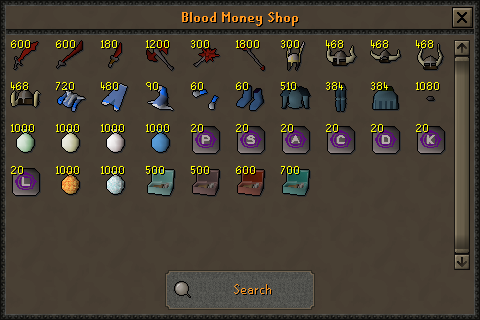 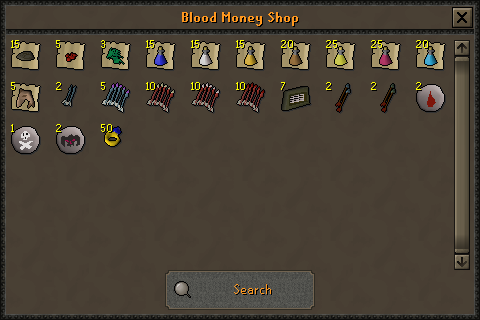 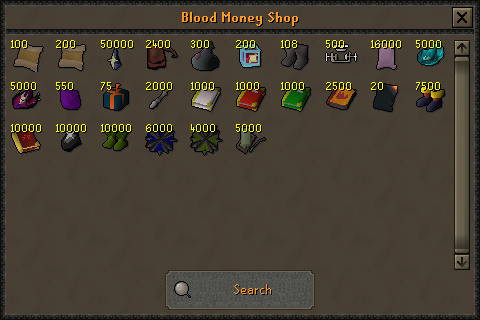 Killing NPCs over 80 combat also has a chance to drop a Deadman Supply Crate and its key (as seperate drops). These are untradable, and can be opened to obtain high level items such as Fire Capes, Fighter Torsos, Void Pieces and supply crates. You can right-click -> peek to see all the possible items. 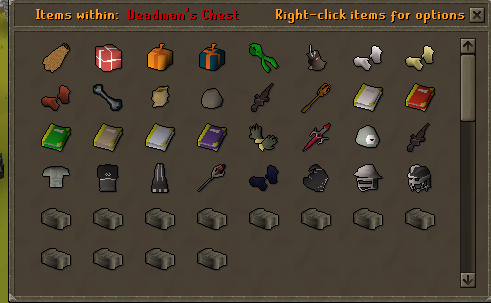 Just like loot crates, the Roaming Trader will spawn in a broadcasted location. The Roaming Trader’s inventory will change each time, and can offer great early game equipment.

As mentioned above, the roaming trader has gotten a bit of a buff. He now has two new wanted items in stock, but be aware he usually is located in multi!​

Questing on LegacyPK DMMT is optional, and many quests have been autocomplete. You do not need to complete quests to access content, including access to the Culimancers chest and to purchase Barrows Gloves.

PVP Weapons can be obtained by killing monsters within the wilderness, albeit very low drop rates. These weapons are very powerful and can be used in the final tournament.


Items available will differ depending on the day, this is an image of the full store now.

Upon looting the chest, a hoard of NPCS are now spawned and will attempt to attack the opener , this is on top of the already affects of TB, posion etc..

It will also now take a minute to open the chest as opposed to the previous 30 seconds.

Necrolord now has a new mechanic added to him, he has a chance to reflect all damage you deal to him when he is in this 'mode.' Here is an example of this mechanic occuring:

We've also decided to make Necrolord singles so other teams have a chance to contest world bosses, the boss itself will still be able to be attacked by multiple people, it will just be in a singles area now (west of chins, south of the forgotten cemetery, mage bank)

Tormented demon as well has a new added mechanic to him, he will now spawn fire traps around him that will explode for a great amount damage in a 3 x 3 area

Once the final hour starts, you will first be given a Deadman Teleport Tab. You will only be given this Tab if you are in a P2P safezone. Using this tablet will teleport you into one of the F2P safezones at random. During this stage, all Safezone guards will no longer be aggressive, and will not attack skulled players.

The finals have begun. You will see an announcement, similar to the preview below. This announcement will last for 10 minutes, and you should move towards F2P areas of the world map, and out of dungeons and instances. 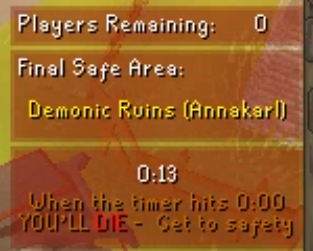 ​
This interface contains all you need to know to make it to the 1v1 stage of the tournament. As the Fog creeps in across the map, certain areas will be dangerous to enter, and often lethal. The interface will tell you where your final area is, and if the area you are currently inside is safe or not.

If you are NOT inside a safe area, and the timer hits 0, you will be instantly killed by the fog. If you're in safezone and enter the danger zone, a 2s timer begins and then you starting taking damage every 3 ticks. This damage will increase as follows: 4, 9, 13, 18, 22, 27, 30. To be safe, leave the dangerous area. Entering a dungeon or cave will instantly set the tick damage to 30.

Every 5 minutes, a chest will drop in an announced location. These chests contain very valuable items that one player will receive. Once a player has taken the items from a chest, a message will announce the player that took it, and the items that they received. This message will last for 10 seconds. In the image below, you can see the chest and the announcement of the player that received the item. 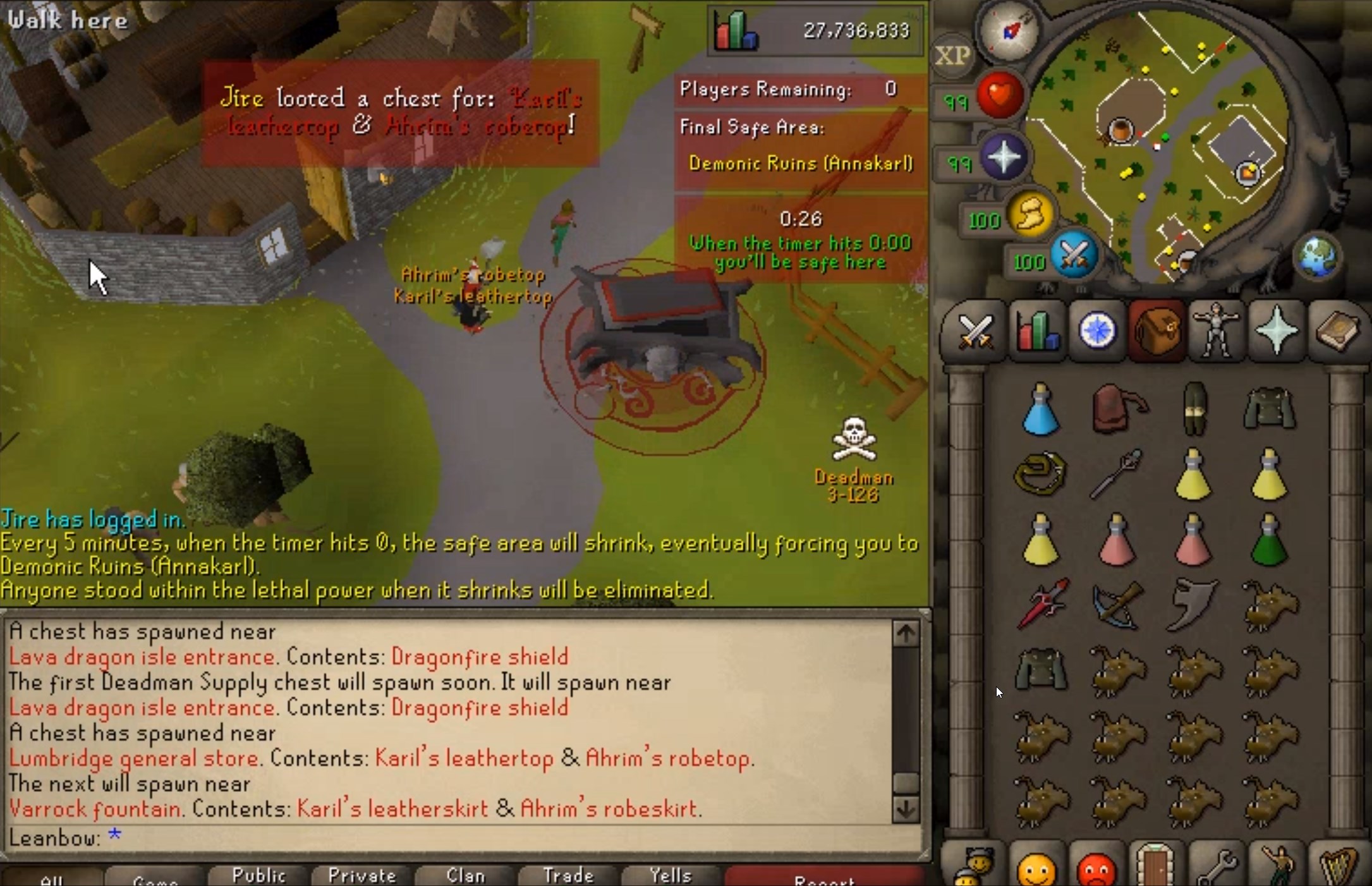 The final zone is shown below. This season we have moved the final zone back to Falador. There will be glowing orbs showing the boundaries and if you step out of the specified zone, there is a 2 second delay before you start taking damage from the fog every 3 ticks.


This is also explained in-game via an announcement, as shown below

In the first 1v1 arena, you have access to a unique chest which allows you to access your bank and also change your spellbook. You can change your spellbook by right-clicking on the chest. You will have 5 minutes to organise your gear and spellbook. Please note that you cannot pick up dropped items or trade other players once the 1v1 stage has begun.

​
Once the 5 minute timer is up, your fight will begin. If the duration of the fight extends to over 5 minutes, a deadly fog will slowly roll into the arena, dealing 2 damage to both players every 3 ticks. Please note that the fog will not arrive during the Finals and Semi-Finals.

Once one player emerges victorious from their fight, their stats and inventory are reset, and the following items are given to the player before being teleported to their next fight:

Dying in the PermaDeath stages is no laughing matter. When you die, you are instantly jailed in Falador Castle, and then logged out. You will then be gracefully reminded that you have died, as shown below. 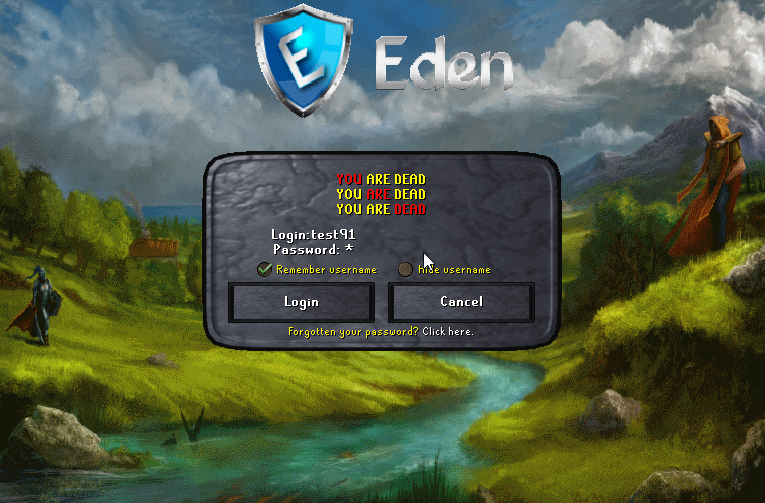 In order to spectate when you're dead, we will be streaming the whole event so people can watch the finals in progress.

We understand that flaming is just part and parcel of DMM, but please keep racism out of the game and in associated Discord servers.

LegacyPK's DMM will operate on a 2 Strike System. Each player will have one warning and will then be removed from the tournament if found to be breaking the rules a second time.

This tournament, we are being firm on a view different highlighted issues from the previous tournaments:
Please report any player infringing on these rules to a member of staff, either in-game or via the LegacyPK DMM Discord. All staff decisions are final and staff harassment will be met with in-game muting or removal from the tournament at staff discretion.

Please also report all bugs you find to staff, no matter how small. This is so that we can continue to improve to make LegacyPK's DMMT the best RSPS Tournament out there.